The survey confirms findings of earlier surveys, with up to 90 percent of credit insurance purchasers responding that they are satisfied with credit insurance and would purchase it again when borrowing, and shows again that consumers receive ample notice that credit insurance is a voluntary option to insure loans when they borrow. 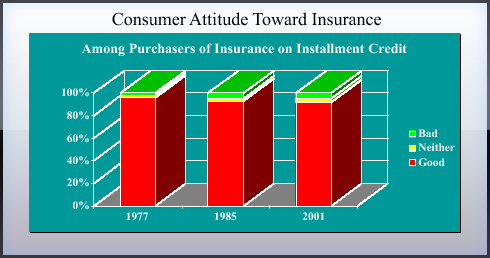 Results and analysis of the survey are reported in an article by Mr. Durkin entitled, “Consumers and Credit Disclosures: Credit Cards and Credit Insurance” that also examines a survey conducted during 2001 concerning consumer attitudes about the use of credit cards and credit disclosures under the FRB’s Regulation Z governing truth in lending.

The Consumer Credit Industry Association (CCIA) has reviewed the findings and concluded the new study confirms the findings of every study conducted during the past 30 years in which consumer knowledge and attitudes about credit insurance has been tested. Uniformly the studies find that consumers value credit insurance, understand it, received ample notice that selection is voluntary, and said they would purchase this valuable financial protection again when they borrow.

The CCIA believes the findings of the study and the conclusions drawn from it in the analysis by Mr. Durkin should be a strong signal to legislators and regulators that credit insurance is an important consumer option. It is a strong signal that this option should be preserved in the insurance marketplace because consumers who purchase credit insurance do so knowingly, willingly, and with expectation that public policymakers will understand its importance for them.

Further, the high satisfaction levels reported by credit insurance purchasers and their willingness to repurchase, including first and second mortgage and home equity borrowers, indicates that consumers who use and value credit insurance make no differentiation and have no concerns about whether they finance the insurance through payment of a single premium or as a monthly charge. 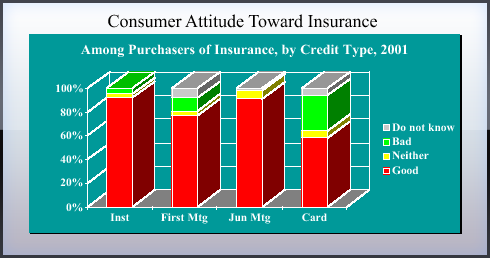 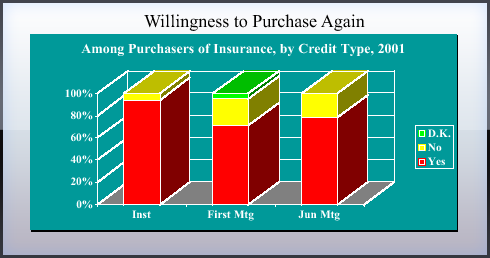 The survey asked respondents if they believed the purchase of credit insurance made any difference in the willingness of creditors to grant credit, a question that was asked in earlier surveys in 1977 and 1985. Reviewing the responses of consumers Mr. Durkin wrote, “In each of the three surveys, a large majority of both insurance purchasers and non-purchasers believed that purchasing credit insurance was irrelevant to this decision by installment lenders.”

His analysis noted that the willingness of consumers who use credit insurance to purchase it again when borrowing “seems to indicate that they feel considerably better about the product than its critics.”

A clear majority in all three categories said they would purchase credit insurance again when borrowing, including 94 percent of installment borrowers, almost 78 percent of equity borrowers, and 71 percent of first mortgage insurers.

Previous landmark surveys and studies of consumer attitudes to credit insurance include a 1973 study by the Ohio University College of Business Administration, 1977 and 1978 surveys for the Board of Governors of the FRB, a 1986 study for the Federal Reserve Bank of San Francisco, and a 1993 study by Purdue University.

There are four principal types of credit insurance: credit life, credit disability and credit property insurance, and involuntary unemployment insurance that respectively insure debt repayment in the event of death, accident or ill health, loss or damage to property, and involuntary loss of employment. Founded in 1951, the CCIA represents more than 140 credit insurers throughout the United States.